"To what is One, sages give many a title."

evidence for Christianity in Britain is a statement by Tertullian, c. 200 AD, in which he described "all the limits of the Spains, and the diverse nations of the Gauls, and the haunts of the Britons, inaccessible to the Romans, but subjugated to Christ"

The written history of Ireland began in earnest after the establishment of Christian monasteries in the 5th and 6th centuries AD.

But, the transition to Christianity was different to much of Europe.

On the left, a saffron clad monk sings his praises at Debre Damo in Ethiopia

Firstly, was slow enough to allow a rich mixed culture to develop in which many of the features and literature of older Ireland survived.

Thus the peaceful appropriation of many of the old religious sites and the survival of much of the native pre-Christian literature alongside the imported Gospels, psalm books and Classical tracts. 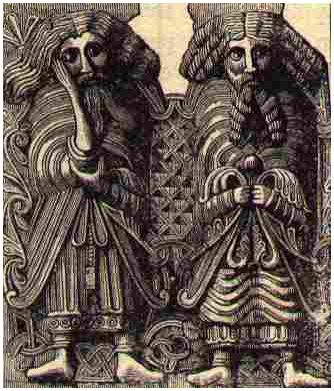 The influences are a fascinating mix

The history of certain British words derived from Latin and borrowed by Old Irish, such as Cáisc ('Easter') and cruimther ('priest'),

suggests contact of Ireland with Britons in the fourth and early fifth centuries.

"These words reveal practice of the faith in a Church without a bishop, for there is no word in rudimentary Old Irish for 'bishop'. The first stratum of Christian loanwords is therefore possibly pre-431 when 'the first bishop' arrived in the country."

The vocabulary of the Irish Christians  appears to have come into Old Irish through British speech rather than directly from Latin.

which were current in western Europe in the late fourth and early fifth centuries.

Saint Jerome vilifies Pelagius as a 'most stupid fellow, heavy with Irish porridge' and claims that he, or his companion Coelestius, had 'his lineage of the Irish race, from the neighbourhood of the Britons'.

Under the year of 432 Prosper of Aquitaine entered in his Chronicon (Chronicle) the words:

'Palladius, ordained by Pope Celestine, is sent to the Scotti who believe in Christ, as their first bishop.'

Palladius, probably a deacon of Auxerre at the time of his elevation, is the man referred to above as having been instrumental in having Germanus sent to tackle Pelagianism in Britain.

Prosper seems to imply that Palladius's mission was to Ireland itself. Pope Celestine: 'By ordaining a bishop for the Scotti, while he strove to keep the Roman island Catholic, he also made the barbarous island Christian.'

Patrick states that he himself had travelled to places in Ireland 'where no one else had ever penetrated, in order to baptise, or to ordain clergy, or to confirm the people' – thus insinuating that by the time Patrick arrived he had to travel to the far regions, as many more accessible places had received ministrations from other sources.

Art historians have discovered links between specialised motifs, notably the Visigothic marigold design, on artifacts in the Iberian peninsula and in Ireland.

These supposed associations are confirmed (or at least supported) by references in the writings of Orosius, the early fifth-century Portuguese historian and apologist, to a special relationship between Galicia, the Celtic settlement in Spain, and Ireland. (It is interesting to remember, as supportive evidence of the strength and endurance of this interrelationship, the existence of a very early Celtic monastery with Irish connections, prior to the Arab conquest of Spain in the seventh century, at Santa Maria de Bretoña near Mondoñedo in the same region.)

Pelagius taught that the human will, as created with its abilities by God, was sufficient to live a sinless life, although he believed that God's grace assisted every good work. Pelagius did not believe that all humanity was guilty in Adam's sin, but said that Adam had condemned humankind through bad example, and that Christ’s good example offered humanity a path to salvation, through sacrifice and through instruction of the will. Jerome emerged as one of the chief critics of Pelagianism, because, according to him, sin was a part of human nature and we couldn't help but to sin.

The Leiden Glossary, a twelfth-century document based on a sixth or seventh-century account written in Gaul but now lost, claims that such a migration took place:

'All the learned men on this side of the sea took flight, and in transmarine parts, namely in Ireland and wherever they betook themselves, brought about a very great increase of learning to the inhabitants of those regions.'

It is surely significant that the earliest stratum of Latin loan-words in Old Irish is concerned with the vocabulary of mercantile activity.

"you shall have no other gods before me"

And Elohim said, Let us make man in our image, after our likeness: and let them have dominion over the fish of the sea, and over the fowl of the air, and over the cattle, and over all the earth, and over every creeping thing that creepeth upon the earth.

Ireland and The Middle East

Any account of Christianity in Ireland must begin in the Middle East and particularly Egypt. In the broadest terms we are describing the replacement of polytheistic philosophies with a monotheistic philosophy.

The Aten cult, which existed during the reign of the Egyptian Pharaoh Akhenaten in the fourteenth century B.C.E., represents another possible origin for monotheism. Those under Akhenaten's predecessor Pharoah Amenhotep IV seem to have worshipped Amen-Re, the god representing the sun, above and beyond all others within a pantheon.

Thus, it seems that the Zoroastrian and Egyptian conception of singular divinity may have found its way into the Abrahamic traditions by way of these shared mythologies. Judaism received undeniable influences from various pre-biblical religions of Egypt and Syria.

Each of the following  are sources for various concepts and traditions found in Christianity but are more revelant for early christianity in Ireland because of the early date for transfer and subsequent survival and conservatism.

Zoroastrianism the earliest example of monotheistic belief in history.

Zarathustra founded Zoroastrianism sometime during the long time-span between the eighteenth and sixth centuries B.C.E. by turning against the polytheistic ritualism that was prevalent among Indo-Iranian religions at that time.

"The fire shall ever be burning upon the altar; it shall never go out", (Leviticus 6:13, KJV),

When a new temple (church building) is consecrated the bishop kindles a flame in the sanctuary which traditionally should burn perpetually from that time forward. This sanctuary lamp is usually an oil lamp located either on or above the Holy Table (altar)

ressurection of the dead

The Hebrews developed gradually a monotheistic

the earliest Christians were Jews

three precincts, church as a tabernacle for Holy shrine that is mobile Hebrew the same.

Fourteenth-century B.C.E. texts found at Ugarit describe mythical battles between Yahweh and various other Canaanite gods, with Yahweh consistently emerging as the champion.

For Pre-Socratic philosophers, including Xenophanes, such an idea seemed to be the highest manifestation of religious thought. For example, Xenophanes depicted the spiritual union of the so-called "All-One" as uncreated, unchangeable, and ubiquitous throughout the universe.

Parmenides developed this philosophy of the One in his poem

closed down in the sixth century, many of their scholars found refuge in the Persian

Celtic, and Byzantine monks all used to pray on decorated prayer carpets, known as oratorii, just as Muslim and certain Eastern Christian churches have always done, and still do.

But it is with Egypt that the connections

The primitive Coptic churches appear to have retained this triple division,

Coptic monasteries, at first converted the old temples such as Karnak

Copts were well used to translating from Greek and Latin texts to their own vernacular. May well have transmitted this to the Irish monks.

Amlaíb's byname, cuarán, is usually translated as "sandal" or "shoe". It derives from the Old Irish word cúar meaning bent or crooked. It is first applied to him in the report of the battle of Slane in 947 in the Annals of Ulster. The usual translation may be misleading. The epithet probably refers to a distinctive style of footwear. Benjamin Hudson points to the description of a cuarán in a twelfth century satire, where it is made of leather folded seven times and has a pointed toe. In Aislinge Meic Con Glinne and Scél Baili Binnbérlaig, the cuarán is waterproof. In the first story Mac Con Glinne cleans his by dipping them in his bath; in the second, a cuarán serves as a vessel to drink from. That the cuarán was a piece of footwear specific to Dublin is suggested by statements in other stories that have cobblers in the town owing a cuarán in taxes.[44]

The family of Mac Giolla Chaillín took their name from St. Caillin. The surname is also commonly Anglicized as Kilcullen, Kilgallen, and Kilgallon, and is found mainly in County Mayo and County Sligo.