The Tuatha of Ireland

The Tuatha of Sligo: 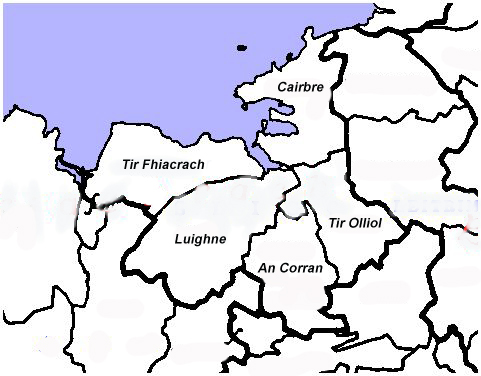 Sligo Sligeach is now a county in the northwest of Ireland. The name refferred originally to the river, then to the town that grew up on its banks and then to the county created by the English in the 17th century.
At the dawn of Irish recorded history in the fifth century AD, the northern half of Ireland was coming under the domination of a new and powerful group of dynasties, the UI Neill, descendants of the Connachta.
The Ui Néill are a group of dynastic families who claim descent from Niall Nine Hostage (Niall Naoighiallach).
Niall himself was a son of Eochy Mugmedon (Slave Lord) a High King of Ireland in the fourth century.
Eochy Mugmedons sons were, namely Brian, Ailill, Fiachra, Fergus Caech (possibly), and Niall himself.

The first three sons became the ancestors of three Irish dynasties, known as the Teóra Connachta, or the Three Connachta of the province of Connacht.

See that the territories of the northern and southern Ui Neill as well as the Teora Connachta all meet at Sligo. It is highly probable that it is from this region they first set out on their conquests.

For example M222 (R1b1b2a1a2f2) is tied to the Uí Neill and the Uí Briúin and the Uí Fiachra which are both branches of the ancient Connachta (supposedly descended from the half brothers Niall,Brion and Fiachra).

Eventually, the Uí Néill kingdoms, their allies, client kingdoms and subject tribes, comprised most of the province of Ulster, all of Connacht, and a large part of northern Leinster. as well as large parts of Scotland
The Sons of Eochaid Mugmedon
Ui Brian Breifne
the O Ruairc (O' Rorke) originally Kings of Breifne (modern Leitrim and Cavan).
O' Reilly were chiefs of east Breifne, which is now Cavan.
Ui Brian Ai
O' Connor, Mac Dermot, MacDonagh, MacHeraghty
Settled on the plain of Magh nAI (modern Roscommon) they controlled the lands on which Rath Croghan stands, the ancient capital of Connacht.
the O' Conchobar kings of Connacht were of this branch.

from who descended the Uí Ailello
This dynasty sank into obscurity at an early date. but the name is preserved as the tuath of Tir Ailell (Tirirell) in Southeast Co. Sligo.
The Lords of Tir Ailill were of the Ui Bruin AI
The Mac Donagh surname originates from Donnchadh, son of Tomaltach na cairge (of the rock) ua Mac Diarmata, who was King of Moylurg 1197-1207. They later split into two groups, one based in Collooney and Ballindoon (Tirerril), and the other in Ballymote (Corran).
Niall Naoighiallach Niall of the Nine Hostages
Niall was a warrior and king of the Northern half of Ireland in the fifth century
The descendants of Niall, the Uí Néill were to become one of the most influential and powerful dynasty in Ireland for over a thousand years down to the 17th century. They established or continued the High Kingship of Ireland at Tara.

The Sons of Niall Naoighiallach

Patrick is said to have met Lóegaire's daughters near Cruachan, a complex of prehistoric sites associated with the kingship of Connacht in legend and in history, also Lóeguire,

The Irish annals and king lists include him as a King of Tara or High King of Ireland. He appears as an adversary of Saint Patrick in several hagiographies.

His dealings with the saint were believed to account for his descendants' lack of importance in later times. There are several accounts of his death, all of which contain supernatural elements, some of which concern his wars against Leinster.

Conall Cremthainne (died 480), also called Conall Err Breg, was an Irish king. He was the son of Niall of the Nine Hostages, and one of the progenitors of the Uí Néill dynasty.

He is the first king of Uisnech in Mide from the Ui Neill mentioned in the Book of Leinster king list. He may have been the same person as Conall Gulban, the distinction arising from 8th century politics.
(Clan Colman) O' Connolly O' Hart, O' Maol Seachlainn
founded the kingdom of Tír Conaill in the 5th century, comprising much of what is now County Donegal.
His byname Gulban derives from Benn Gulban the mountain of Benbulben in Co.Sligo, from which the sons of Niall set out upon their conquest of the north.
He is important in the history of Irish Christianity as he was the first nobleman baptised by St.Patrick, thus opening the way for the conversion of the ruling classes of Ireland.
O' Connell, O' Donnell, O' Boyle, O' Gallagher, O' Doherty

was a king of Uisnech in Mide

Fiachu appears as a conqueror of Meath in the annals.

The O'Higgins sept which produced filí or poets, including the famous Sligo poet Tadg Dall O' Huiginn, is said to be descended from his son Uigin.

Eoghan mac Néill (died 465) son of Niall Noígiallach, was an Irish king who founded the kingdom of Ailech, later Tír Eoghain (modern County Tyrone) in the 5th century. He was also the ancestor of the Cenél nEoghain dynasty and their septs (MacLaughlin, O'Neill, Corrigan, etc.).

Eogan was a close friend of Saint Patrick and received Patricks blessing. With his brother the high king Lóegaire mac Néill (d.462), he was one of the judges in a dispute over the succession to Amalgaid (d.440), king of Connacht among his sons competing to rule their territory of Tir Amalgaidh in northwest Connacht.[3]

Eoghan, King of Tír Eoghain, and Prince of Inis Eoghain is buried at St. Patrick's Church in Iskaheen, Innishowen, Donegal. A plaque there states "Eoghan Prince of Iniseoghain, Son of Niall of the Nine Hostages. Died 465 of grief for his brother Conall. Baptised by Patrick and buried in Uisce Chaoin"

This territory in north Sligo is named after Cairbre mac Neil,  High King of Ireland, reputed enemy of St. Patrick.

Coirpre may have led some of the earliest recorded Uí Néill conquests in the midlands.

In earlier historical times, Cenél Coirpri may have been of sufficient importance to attract the attention of largely hostile writers. Tirechán's life of Patrick states that Coirpre was cursed by the saint, at Tailtiu, so that none of his descendants would be High King

It was a saor tuath or free territory.

O'Connors Sligo were Lords since the 13th century. They are a branch of the O'Conchobar dynasty related to the Kings of Connacht.

the country of Fiacra, half brother of Niall of the Nine Hostages

the chief families are Ui Fiacrach

the country of Aillil the half brother of Niall of the Nine Hostages.

Cormac na Beag Fada is ancestor of this family they are a younger branch of the Mac Diarmada of Magh Luirg.

Named from the ancient tribe the Luighne

This tuath was Aiteach Tuath, an unfree tuath, as it was ruled by a dynasty unrelated to the the ruling aristocracy of Connacht.

were ousted by the Mac Donnchadha

The Seed of Murray Siol Muireadheach

The term Síol denotes the seed, or descendants, of Muiredach.

The Síol Muireadaigh were a dynasty of related clans, all descendants of King Muiredach Muillethan of Connacht (died 702), all of whom lived in north-central Connaught.

Branches of the Síol Muireadaigh included

A contact of tribute to the King of Connacht states that

“The righteous king of Conmaicne is entitled to ten horns on entering his drinking chamber, ten swift horses to mount, two bracelets, and two sets of chess.”

The Síol Muireadaigh were a dynasty of related clans, all descendants of King Muiredach Muillethan of Connacht (died 702), all of whom lived in north-central Connaught. The term Síol denotes the seed, or descendants, of Muiredach.

Septs of the Síol Muireadaigh included

The Origin of Lough Gill