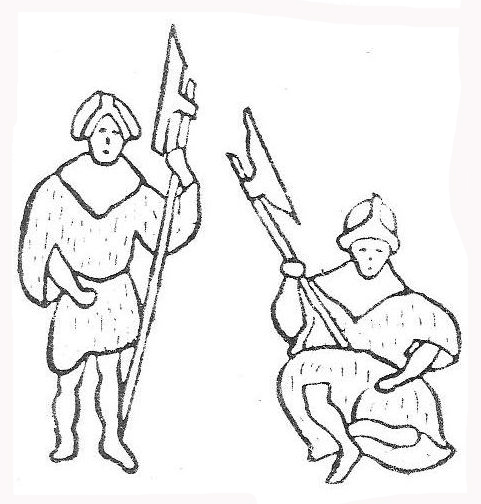 They were a prominent feature of Irish armies from the twelfth to the sixteenth century. Many of them settled as hereditary soldiers in service to Irish lords. The majority of them are of Scottish origin.

The saying above refers to the Irish belief that it was better to trust in these mobile warriors than in static stone defences, as the Normans were wont to do.

The Irish were noted for their fatal dexterity with the battle-axe.

Giraldus mentions that among other weapons they had a heavy axe excellently well wrought and tempered; and he goes on to say:—"They make use of but one hand to the axe when they strike, and extend the thumb along the handle to guide the blow: from which neither the crested helmet can defend the head, nor the iron folds of the armour the rest of the body. From whence it has happened, even in our times, that the whole thigh of a soldier, though cased in well-tempered armour, hath been lopped off by a single blow of the axe."

when Sir John Davies—an Englishman—the Irish attorney-general of James I., testified:—"For there is no nation of people under the sunne that doth love equall and indifferent [i.e. impartial] justice better then the Irish; or will rest better satisfied with the execution thereof, although it bee against themselves: so as they may have the protection and benefit of the law, when uppon just cause they do desire it."

But later on the Penal Laws changed all that, and turned the Irish natural love of justice into hatred and distrust of law, which in many ways continues to manifest itself to this day. 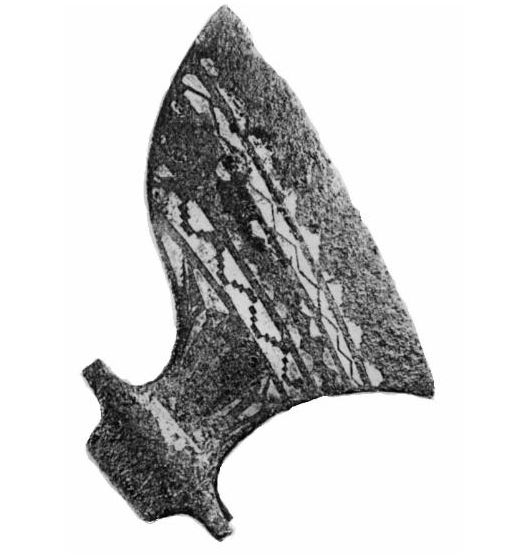 This provides a relatively clear illustration of the technique in question. The galloglass is holding his sparth ax above his head, grasping it near the middle (but not quite at the middle) with both hands close together. Behind him stand two kern foot soldiers, backing him up with spears or javelins.

They fought in units combined with the light infantry or Kern

This unit of a Galloglas and his two servants are referred to as a "spar," the large axe that many Galloglas carried and from which word the Sparth is derived .

A Corrughadh nominally consisted of 100, but actually 80 Galloglas. Each Galloglas received annual payment of 12 cattle plus victuals in the form of butter and corn-meal.

Commanding the Corrughadh was a "Consapal." The consapal received payment annually of 36 cattle, victuals equivalent to that of man, a war-horse and hack. The consapal was allowed a shortfall of 13 men, whose pay went to the Consapal.

This would mean that by the end of the 16th century Galloglas Corrughadh were at minimum 87 men, plus their servants.

The lack of a helmet was not fined since the risk of death in battle was deemed sufficient punishment. By 1512 there were reported to be 59 Corrughadh through Ireland in the employ of various Kings and lords.

In battle the Galloglas had a formidable reputation for standing their ground in a do-or-die manner.

We read in 1416, in the Annals of Connaught: "O'Ruairc's sons were in great distress until they reached their Galloglas ... but when they reached both parties turned upon their pursuers and killed 48 of the Fir Manach (Fermanagh)." In 1419: "The Connaught horsemen were hurled back towards their Galloglasses, but these held their ground and fought on."

At the end of the 15th century, a Galloglas captain named Barrett (Bairéad) with 24 Galloglas fled the Tirawley district of County Mayo in Connaught and entered the service of the Anglo-Norman Earl of Kildare. Soon the force of Barrett Galloglas was swelled by local recruitment and training to 120 men. The Barretts became the primary Galloglas of the Kildare area, to be found in local and national records till the end of the 16th century (at which time we find Barretts serving as officers in the Irish Regiments in Spanish Service).

"Valiant and hardy ... great endurers of cold, labour and all hardness, very active and strong of hand, very swift of foot"; "Picked and selected men of great and mighty bodies"; "men of great stature, of more than ordinary strength of limb"; "grim of countenance, tall of stature, big of limb, burly of body, well and strong timbered chiefly feeding on beefe, porke & butter."

One Elizabethan observer reported that "a battle of Galloglas be 60 or 80 men harnessed on foot with spars, every one whereof hath his knave to bear his harness, whereof some have spears, some have bows."