Irish Ceatharna [Kern], or native soldiers existed from the most ancient times until the middle of the 17th century.

They were the archetypal Irish light infantry.

Relying on speed above all, they never adopted the use of armour.

Specialised in all aspects of guerrilla warfare, skirmishing, scouting and pursuit.

For centuries they were successful, and did not change their style of fighting. A remarkable achievement in the face of what on paper at least are far stronger and more heavily armed and armoured Viking, Norman and later English government armies.

known to English as Kern, a corruption of Ceatharna, a word possibly from a root ceathar meaning four, or square, which may have referred originally to the shape of formed bodies of troops. 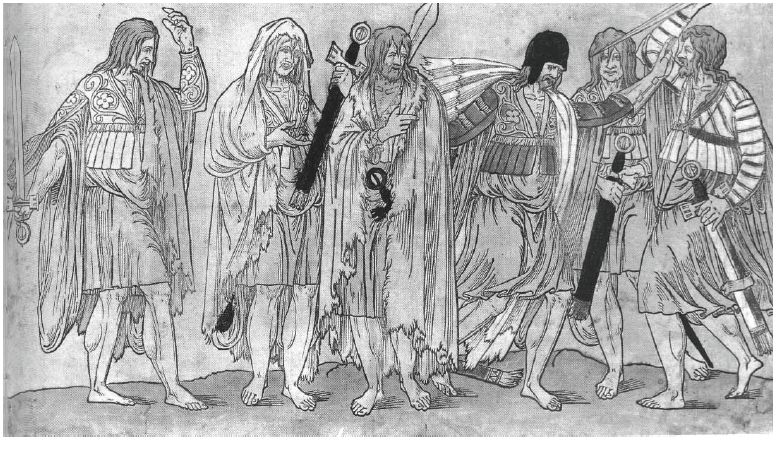 The picture above is of a group of Kern drawn "from the quick" i.e. from life

Over the leine a short embroidered jacket called an inar woven of goats hair with half sleeves resting on the upper arm.

a mantle of woven cloth, usually wool and fringed with tassles either simple in shape  shaped with a hood  or lined with fur, often otter pelt for its waterproof qualities a blanket and over the head against the elements and midges

Swear oaths on weapons common in many warrior cultures

Guard on the left forearm, wrapped cloak, or shield called a sciath

Spears and javelins are commonly carried, known as darts flighted javelins. Javelins are thrown with the help of a looped cord increasing the speed of the cast and perhaps imparting a spin to the weapon. 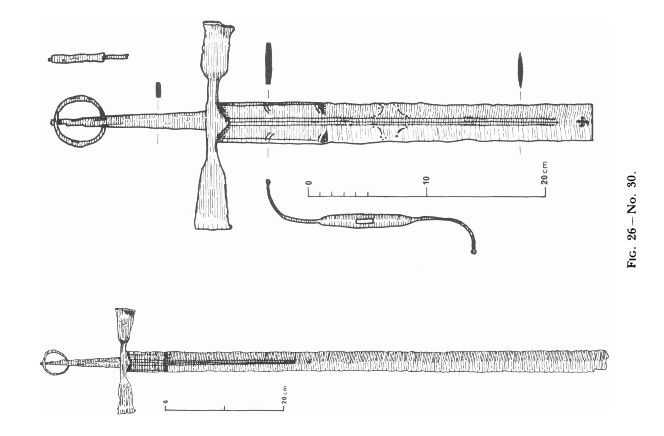 The most ancient and distinctive weapon is a short sword with a ring shaped pommel, sometimes with  a blade flared toward the tip.

Swords were not suspended from the hip as in Europe, but was carried always in the hand, usually the left. This unusual method, which would appear at first to be an encumbrance. But it is always at the ready and can be easily concealed beneath their cloaks.

A light woven scabbard with fringed end. Thrown down when sword is drawn

This class of weapon, a fast bladed slashing sword